Every dog owner knows that they can install a doggy door to provide their canine chum with outside access, but not all of them are aware that these doors can be mounted in a wall rather than having to go through a standard door. It often costs a little more for this to be done, but installing a wall-mounted doggy door comes with a whole heap of advantages.

Doggy doors that are placed within normal doors need to be built slightly higher, so older or short-legged dogs might find them harder to use. This problem is exacerbated by the fact that you won't really be able to put anything on either side of the door since this will block your own way in and out.

The same isn't true when you mount the doggy door within a wall. The gap won't sit flush with the ground outside; the passage between outside and inside will be a little lower and longer. This will make things easier for older or shorter dogs. You'll also be able to place a short ramp on either side without worrying about having to move it whenever you leave.

When you mount your doggy door within an existing door, you're not going to have many options about where that door goes. You'll normally only be able to select either the front door or the back door. Perhaps your back door passes through a laundry room and you don't want your dog in there unsupervised, or maybe the front door runs through the hall and you don't want paw prints there.

If any such problems occur, a wall-mounted door is going to be much more advantageous. You can position it almost anywhere. One great option is to put it in the room that normally contains your dog's crate. If you leave, you can place the crate against the doggy door with its own door facing it. Your pooch will be able to get outside to go to the bathroom, but they won't be able to wreak havoc in your home.

Finally, most people simply feel that wall-mounted doggy doors look a lot better than door-mounted ones. The latter often makes the door itself look cheaper, and they certainly break up its design. Also, having a doggy door here makes it more conspicuous.

In contrast, wall-mounted doggy doors are less noticeable and can be made to blend in more with the style of the surrounding house. 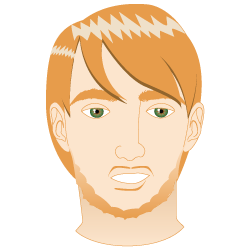